Other European accessible countries or not very accessible ones: Europe covers just over 10 million square km and includes almost 50 independent states, some of which are in areas that partly fall within the territory of Asia but, for historical and cultural reasons, are considered part of Europe.

27 European states are part of the European Union.
In addition to the main states, listed above, there are other countries that have accessibility requirements below the average of the countries of the European Union, but which can be visited by travelers in wheelchairs if :
– Traveler can use manual, folding chairs
– Tourist can move, possibly with help, from the chair to the seat of a spacious car
– It retain a discrete residual mobility that allows them to use toilets with less access.

As for the Baltic countries: Lithuania, Latvia, Estonia a lot has been done to make them moreaccessible.
There are public transport in major cities with mobile ramps to allow access for people in wheelchairs.
There are some taxi companies that have accessible means but, being few, they must be booked a few hours before the service.
Cars with manual controls can also be rented while, at the moment, we cannot rent accessible vans without a driver.
In the main cities there are hotels with some rooms suitable for disabled people.
The cities have historic centers that date back to the Middle Ages, so stone paving can be a problem for those who use a wheelchair.
Many monuments have been made accessible.
On request, tours in 1 or more of the 3 countries can be organized, possibly combined with a tour in Finland which has good maritime connections with the 3 Baltic countries

The largest nation in the world extends from Europe through all of Asia covering a vast territory.
The main tourist destinations are in the European part of the country: Moscow (the capital) and St. Petersburg (formerly Leningrad).
They are very populous cities, especially Moscow, which preserve important monuments of their imperial past and of the historical period recently concluded in which the USSR dominated a vast territory of federated Socialist Republics and satellite countries.
With the end of the USSR the territory of present-day Russia has been greatly reduced while remaining very vast.
The country has limited accessibility even though new accommodation facilities have been built that have accessible rooms (but generally they are very expensive 4 and 5 star hotels).
Transportation is one of the biggest complications. 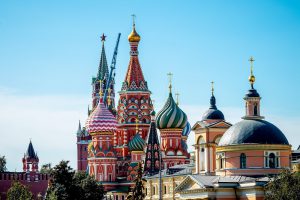 The Moscow Metro is one of the largest in the world but few stations are equipped with elevators and moreover there are often differences in level and spaces between carriages and platforms that make access by wheelchair difficult.
Many land vehicles are equipped with ramps but are often crowded.
We are not aware of accessible taxis.
General accessibility is quite good especially in the central areas.
The city is built flat, the pavements are generally spacious but the crossing of the great avenues is usually through tunnels and many have no slides.

It is generally included in all Baltic Sea cruises that stop there 2 days, 1 night.
It is possible to organize excursions for both 2 days, with accessible vans and with guides in each language.
The program generally includes the visit of St. Petersburg which usually also includes the famous Hermitage Museum, St. Peter and Paul Fortress, the Church of the Holy Blood, …
The second day excursion to the surroundings of St. Petersburg to visit one of the summer palaces of the Tsars.
The local operator also takes care of obtaining the pass for tourists without a Russian visa.

Accessibility in Ukraine for wheelchair users is very limited.
The only positive note are the sidewalks, which are normally very wide and, being the city built on the plain, easy to walk on.
By 2017, a dozen accessible vans should have entered service that operate a taxi service but do not have a website or an email to contact them.
There are no local operators specialized in accessible tourism.
So a trip to Ukraine could be a real “adventure”

Accessibility in Romania has greatly improved in recent years.
In the capital Bucharest, accessible public transport includes accessible buses and some tram lines  accessible.
The subway has 5 lines and many stations with lifts especially in the central areas.
There are no accessible taxis.
Bucharest and Romania have hotels equipped with rooms for the disabled and accessible means of transport for private services: transfers, visits and even multi-day tours.
Romania offers the possibility of accessible visits of the capital and also of multi-day accessible tours in various regions of the country.

The accessibility of Bulgaria has contradictory aspects.
While there exists in Sofia, the capital, an accessible taxi company that can also be rented for full day services, Sofia’s public transport, which has a metro with 2 lines, is inaccessible.
There are partially accessible buses but on the whole the accessibility of the public gtraspore of Sofia is unsatisfactory.
There are accessible tourist facilities and tour operators who organize accessible accommodation services to Sofia and other regions of the country including the Black Sea coast.

A country, part of the European Union, rich in natural beauty and tourist attractions.
It has a fair accessibility.
The capital Ljubljana has a surface public transport network largely accessible to people in wheelchairs, and general accessibility is good with passable sidewalks, with slides.
There are also several accessible public toilets.
Both in Ljubljana and in the rest of the country, accessible visits and tours can be organized.

Croatia stretches along the coast of the Adriatic Sea and is therefore full of splendid seaside resorts.
However, the coast is generally rocky and not very accessible, unlike the Italian coast, which is sandy almost everywhere.
General accessibility is acceptable and public transport uses numerous accessible means (especially low-floor buses while trams are not accessible).
Zagreb has an oldest part located in the Upper Town connected by a short rack railway. 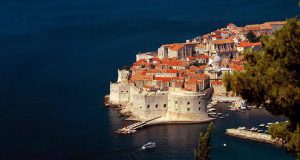 In addition to Zagreb, another important location in the south of the country is Dubrovnik, an ancient port that retains a medieval aspect.
Dubrovnick one of classic stop for any Eastern Mediterranean.
Book a locally arranged accessible shore excursion.
Ask AccessiblEurope for booking.

The capital Bratislava is improving its accessibility
Not all land public transport is accessible.
A wheelchair logo marks the lines with accessible vehicles.
Many of the city’s attractions are accessible with access ramps and elevators to connect floors.
These include the Bratislava Castle, the Devin Castle (ground floor only), the Blue Church, the Slovak National Gallery, the Nedbalka Gallery, …
Numerous superior category hotels (4 and 5 star hotels have specially equipped rooms)

Beautiful country but not very accessible.
We do not have information but if you wish to visit Albania we will do our best to find suitable tourist services.

Although geographically not part of Europe, cultural ties with Europe mean that we have developed close relationships with colleagues in Israel who manage tourist accommodation services specialized in accessible tourism.
Israel, due to its recent history, is one of the countries in the world with the largest number of people who need accessible services and therefore can also offer tourists with reduced mobility the same type of tourist services that are available to Israeli citizens. .

In this brief review of other European accessible countries evaluated from the point of accessibility we have left out many countries.
For any information or tourist services for people with reduced mobility do not hesitate to
contact us.

Tours in other European Countries

Other tours and “tailor made” program on request.

If we do not have the information you requested  on other European accessible countries, we have the tools and international contacts to find what may be useful for you to evaluate the possibility of traveling to the country you wish to visit.
AccessiblEurope Team

By mobile Apps (You must click by smartphone):
By Whatsapp: Click
By Telegram:Click
By Viber:Click
By Zalo:Click

This website uses cookies to improve your experience while you navigate through the website. Out of these, the cookies that are categorized as necessary are stored on your browser as they are essential for the working of basic functionalities of the website. We also use third-party cookies that help us analyze and understand how you use this website. These cookies will be stored in your browser only with your consent. You also have the option to opt-out of these cookies. But opting out of some of these cookies may affect your browsing experience.
Necessary Always Enabled

Any cookies that may not be particularly necessary for the website to function and is used specifically to collect user personal data via analytics, ads, other embedded contents are termed as non-necessary cookies. It is mandatory to procure user consent prior to running these cookies on your website.