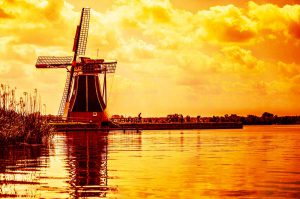 These small (by territory) kingdoms of north central Europe, together with the tiny Grand Duchy of Luxembourg, form an important part of the European Community.

They are largely flat territories, only Belgium and Luxembourg have a part of their territory consisting of hills, up to 500 meters high, and covered with dense forests.
The rest of the region is flat and, especially in the Netherlands, large portions of territory have been literally torn from the sea, they are located below sea level from which they are isolated by a long and articulated system of dams and canals that are part of the characteristic Dutch landscape.

Belgium:
Belgium, a country born from the union of 2 regions of different culture and traditions (Flanders with Flemish culture and Walllonia with French culture) was chosen as the heart of the European Community.
The main European institutions are based in Brussels.
Brussels is a very accessible city, built largely on the plain or with small gradients.
It houses an ancient part, gathered around the scenic Grand Place where the paving made of stones can make it uncomfortable to travel in a wheelchair.
Regarding public transport, buses are accessible even if they are often crowded.
The metro is limited to 6 lines and not all stations are wheelchair accessible.

In addition to Brussels, the most popular tourist destinations are found in Flanders and in particular the cities of Brugge, Ghent and Antwerp.
All three are rich in ancient buildings that date back to the Middle Ages.
The most fascinating is certainly Brugges which preserves, perfectly preserved, and escaped from the damage of wars, a typically medieval environment with the ancient buildings that are reflected in the canals that cross it.
Ghent also retains an ancient center with a medieval aspect but overall it is less rich in things to see even if the best choice, if you have time, would be to visit both.

Netherlands or Holland:
The Netherlands is a great open-air museum: its cities and villages preserve ancient historical centers, full of fascinating monuments and buildings, in an environment of canals and waterways make it unique.
Amsterdam is among the most fascinating European cities.
It houses some very important museums including the Van Gogh Museum and the rijkmuseum, both of which are accessible.
In general the city is accessible because it is built on the plain but the stone paving and the numerous humpback bridges that cross the canals of the “Venice of the North” can put a strain on the tourist in a wheelchair.

In addition to Amsterdam, Den Haag, seat of the Court, and towns such as Delft, Marken, Volendam, are interesting, … which can be visited on day trips from Amsterdam.
Then there are parks and famous floral exhibitions such as the one held every year in Keukenhof for the blooming of tulips, the symbol of the country. 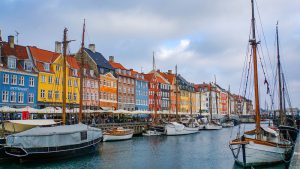 Denmark:
Copenhagen, the southernmost of the Scandinavian cities retains an ancient charm in the central part crossed by the longest and perfectly accessible pedestrian zone in Europe, the Stroget overlooked by ancient houses and palaces.
Another of Copenhagen’s attractions is Tivoli, the oldest and most famous amusement park in Europe with its “fin de siecle” atmosphere.
In the surroundings of Copenhagen, in a landscape between forests and sea, there are castles and palaces linked to ancient stories and legends such as Helsingor, the castle theater of the Shakespearean tragedy of Hamlet.
On the peninsula of Jutland, the continental part of Denmark, which stretches to the north, stands Legoland (legoland.dk), the first Lego theme park.
Fully accessible, it will be a must for those traveling with children and more.

IMPORTANT: Denmark does not use the EURO but its own currency, the Danish Krone  (DKK) whose value fluctuates but at the moment 1 EUR = 7.45 DKK

From Denmark you can reach Sweden with a very long bridge that connects Copenhagen with Malmo, or from the end of the peninsula you can reach Norway by ferry.

In these 3 countries all the services that are found everywhere in Europe are available: accessible hotels with rooms suitable for customers who use wheelchairs, accessible van rental with driver and even without driver, guides who speak every language and in Amsterdam there are also tours accessible by boat along the canals of the city.

For any information or details please contact us
AccessiblEurope.com