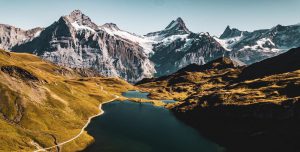 Accessible Switzerland and Austria: The 2 Alpine Nations extend largely along the northern ridges of the Alps that separates them both from Italy.

They are countries in which the territory is not very suitable for intensive agriculture; but other traditional activities have developed such as cattle breeding and dairy production linked to the production of milk.
Austria is part of the European Community and has the EURO as its currency.
Switzerland, whose official name is the Swiss Confederation,) whose value is not part of the European Community, has traditionally maintained a position of neutrality for centuries, which has allowed it not to take part in the 2nd World Wars that devastated the continent. European.
The currency of Switzerland is the Swiss Franc (CHF) whose value is around 7.45 CHF per 1 EUR.

Switzerland:
Switzerland, although not part of the European Union, accepts the Schengen visa.
It can be, with its alpine landscapes, its lakes and its cities, rich in history and art, one of the most interesting European destinations.

Some cities like Lucerne and Bern retain an ancient charm, with medieval old town centers, palaces, old bridges (such as the famous Lucerne bridge that crosses the lake, which dates back to 1300 and which was rebuilt about 20
years ago after a fire there ‘had largely destroyed).

Zurich, Geneva, Basel are modern cities, while retaining ancient parts.
Zurich is one of the main international financial centers.
Geneva, on the shores of the beautiful lake which partly marks the border with France, is home to important international institutions including the Red Cross.
Basel industrial city built on the border of 3 European countries (France, Germany and Switzerland) is home to important industries, especially chemical and pharmaceutical.

In addition to large cities, Switzerland is full of beautiful small villages and small towns that retain their medieval appearance and are located in beautiful locations on the banks of dozens of lakes and alpine valleys.

The accessibility of the cities is excellent even if the historic centers have stone paving which can be problematic for wheelchairs.
In Switzerland the usual services are available: accessible hotels, accessible van rentals with and without driver, cars with manual controls, accessible boats for daytime navigation on the various lakes, accessible gondola lifts to reach the most famous alpine peaks, guides in many languages…

Austria:
What was once the heart of the larger European empire is now a placid nation of German culture that stretches out at the foot of the Eastern Alps.

Austria has some of the most important and interesting cities in Europe.
A tour of Austria will include Vienna, Salzburg, Innsbruck in 8 days and will allow you to have a complete view of the country.

Vienna, which was the imperial capital until a century ago, has some of the greatest monuments in Europe, palaces that date back to the main moments of the Empire’s millennial history, parks and gardens that rival Paris and Versailles.
Vienna’s public transport network is equipped with low-floor trams and buses while the metro has all stations equipped with lifts.
Detailed information at Wien.Info.

Salzburg and Innsbruck are much smaller in size and can easily be explored on foot.
Their historic centers have an ancient aspect, with palaces and churches that can be visited by wheelchair.
Salzburg hosts the best known European classical music festival every year.
Tickets and access for wheelchair users can be booked on request, subject to availability.
Near Salzburg is one of the most visited areas of Austria, the Salzkammergut where on the shores of many lakes, some with boat services, there are small villages in a typically Austrian style.
Innsbruck, the capital of Tyrol, in addition to the historic center has some important monuments that recall its past as an independent county that was united to the crown of Austria at the end of 1600.

Accessible hotels are available in every Austrian city, accessible van transport with driver is available in major cities and can also be hired for multi-day tours.

For any information or clarification please contact us
AccessiblEurope Team