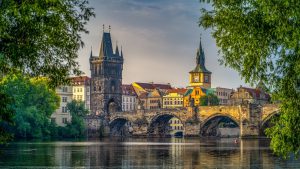 Accessible Hungary, Czech Republic, Poland: They are 3 countries that are part of Eastern Europe and that only after the end of the Soviet Union became part of the European Community.

Poland:
Poland is one of the largest European countries, which still retains part of the forests that in ancient times covered all of Europe.
They are the habitat of the last free specimens of European bison, a mighty wild bovine that in ancient times dominated the plains of the continent until hunting, agriculture and the urbanization of the territory led to its almost complete extinction.

Warsaw, the capital is a city that has been largely rebuilt, especially the older parts after the ravages of war.
The most interesting part to visit includes the old town, the Market square and the Royal Castle.
The general accessibility of the city is quite good but public transport is not as accessible as in other European capitals.
Only surface buses are accessible but they are often crowded.
The subway would theoretically be accessible but the space between the platform and the car is too large for most wheelchairs.

In addition to the capital, there are other interesting places in the South such as Krakow and Katovice.
Katowice, an industrial city in the Silesian mining region, can be the starting point for excursions to the Sanctuary of the Black Madonna of Jasna Gora and the Auschwitz concentration camp.
Krakow offers tourists a perfectly preserved medieval-looking old town and the old Jewish quarter.

Hungary:
A vast country of Central Eastern Europe, it was part of the Austro-Hungarian Empire until the early 1900s.
With the end of the 1st World War the Empire was dismembered and Hungary became an independent republic before becoming part of the Soviet bloc.
Now, with the end of the Soviet Union it is once again a republic.
The capital Budapest is rich in monuments and is located on the banks of one of the main European rivers, the Danube (The river ships that cross it on multi-day cruises, however, are not equipped with accessible cabins).
The accessibility of public transport has been increased and now some metro stations are equipped with lifts (Line 4 and Line 2 although not completely)
Some tram and bus lines are also equipped with accessible vehicles or with ramps for wheelchair access.
As there are accessible minibuses that carry out a public transfer service from Budapest airport.
The accessibility of monuments and public buildings has also been partially improved.
In addition to Budapest, one of the attractions of Hungary is the puszta, the vast Hungarian steppe where wild horses and nomadic Romani tribes who practice horse breeding live.

Czech Republic:
Prague, the beautiful and rich in history, capital of the Czech Republic, is one of the main European cities of art with nothing to envy to the most beautiful Italian, French and other European cities …
The city preserves precious monuments of its rich past as an important imperial city such as the Charles Bridge,
the Prague Castle that overlooks the city, the ancient synagogues that have escaped the ravages of war.
Being a historic city, the accessibility of some monuments could be difficult even if in many cases ramps have been built to facilitate access.
However, even wandering around the historic center, which is quite feasible in a flat city even if the streets are narrow and the pavement uneven, will allow you to enjoy an unforgettable show.
The city has 3 metro lines and most of the stations are accessible.
The site of the urban transport company publishes on the site (DPP) the map of the lines and also other information about the accessibility of public transport.

In the 3 countries listed, accessible services of a good standard are available: hotels with rooms for disabled
people, transport with accessible minivans and driver, guides who speak several European languages, …
More difficult, if not impossible, to rent accessible vans without a driver or cars with manual controls.