Accessible UnitedKingdom and Ireland: 2 Countries strictly connected historically and culturally but very different from each other

London, one of the most fascinating and interesting European metropolises.

It offers tourists some of the main museums of the planet (for example the famous British Museum), buildings linked to the glorious past of one of the largest maritime and commercial empires in history, an empire that covered 5 continents.
To which are now added hyper-modern buildings housing the main multinationals and the main center financial European and among the largest in the world.
London is the capital of the best known Kingdom of the Earth, the Kingdom par excellence, the United Kingdom which links England, Wales, Scotland and Northern Ireland under a single crown.

London is a very extensive city with a widespread network of urban rail connections, the first underground in the world, with over 20 lines.
Unfortunately not many of the London Underground stations are accessible (see website: www.transportforall.org.uk) in a wheelchair.
As an alternative to the underground, many of the countless “cabs” (taxis) that circulate around London and also in most cities of Great Britain are accessible.
They allow access on board to a wheelchair of normal size and to 1 or 2 people sitting on the seats.
Fares are not exorbitant and can be a not too expensive alternative to public service buses which are largely affordable but often crowded.

In Great Britain, accessible trips can be booked in small groups with a guide / guide in English, departing on fixed dates during the summer (and with some departures also in the other seasons), with itineraries of 1 week, in accessible buses.

The programs are typically:
England tour
Tour of Scotland
And other destinations that are updated every year.
For this year or next calendar please contact us.

In addition to these fixed-date group trips, private tours are possible, with personalized accessibility features, anywhere, of any duration, with “tailor-made” itineraries, in Great Britain, Scotland, Wales with English speaking guides / drivers or with guides in almost every language on the planet. 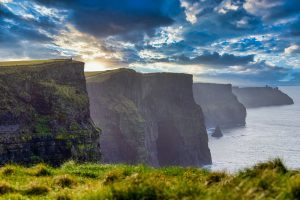 Ireland is also an accessible country especially its capital Dublin and major cities.
Furthermore, the country is largely flat (its highest peak is Mount Carrantuohill 1,039 m) and therefore easily accessible even outside the cities in the green Irish countryside.

Also in Ireland are available all the tourist services that a tourist with reduced mobility may need such as hotels with rooms for people with disabilities, private transport with accessible means with and without driver, expert guides in many languages ​​for visits and excursions, rental of aids as well as accessible tours of the country, in small groups with a guide / guide.