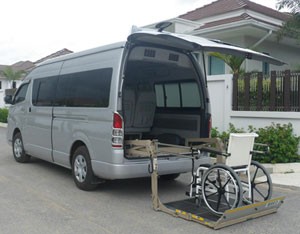 Accessible van to rent with or without driver

Services accessible transports: Transportation is one of the crucial points of an accessible journey and is also one of the most complex to organize.
While hotels are available and accessibility is in many cases guaranteed by current regulations, transport is in many cases managed by small local businesses that are difficult to find and whose reliability in terms of accessibility it is difficult to make a priori assessments. 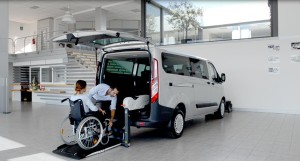 In Europe, the most common accessible transport is made up of vans with rear hydraulic platform or with ramp, rear or side.
In Europe these vehicles can carry a maximum of 8 people plus the driver.
The most popular vehicles are Mercedes Sprinter, Ford Transit, Fiat Ducato, Renault Traffic and similar vehicles.
They can generally accommodate up to a maximum of 3 wheelchairs on board and 4 people seated plus the driver; but in most cases there are only 1 or 2 seats while seated passengers can also reach 5 or 6.
There are also smaller vans like Mercedes Viano and Vito, Chrisler Voyager, Renault Kangoo, Fiat Doblo, …
They carry a maximum of 1 wheelchair attached and up to 4/5 people seated depending on the model.
These vehicles are generally to be booked in advance for transfers, guided tours, excursions and even multi-day trips (in this case the rental cost will also include the costs of accommodation and food for the driver)

Affordable taxis are much less available.
Only in some European countries, and especially in Anglo-Saxon countries, are there accessible taxis.
In London and English cities, the classics have access to a full-sized manual wheelchair edge.
Anywhere in Europe people with small folding manual chairs can use normal taxis if they are able to get around in a seat. 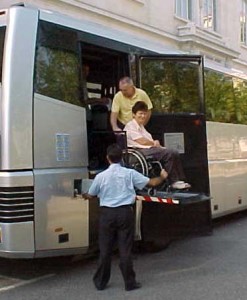 For large groups, organized by travel agencies and tour operators, there are also vehicles that can accommodate a greater number of people and wheelchairs.
Larger vans up to 12/14 seats but in general the number of chairs on board does not exceed 3.
Coach with lifting platform that can carry up to 20/30 people and up to 6/8 wheelchairs) hooked on board (each wheelchair hooked normally takes the space of 4 seats).
The timing of trips organized with these buses requires that it be taken into account that the times required to get on and off a high number of wheelchairs are longer; therefore the program will have to foresee a lower number
of visits and daily stops.

Train:
In Europe, the train has traditionally been the most popular means of long-distance 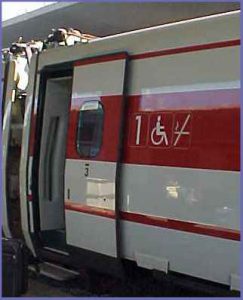 transport.
With the advent of high-speed rail networks, rail transport competes with air transport to

reach the main cities of the continent.
High-speed trains (in Italy the Frecce of the State Railways and Italo of a private company, in France TGV, in Spain AVE, in Germany ICE, …), daytime, are equipped for access on board passengers in a wheelchair, including
technological ones. They have accessible toilets.
Access, almost everywhere, is guaranteed thanks to the assistance provided in the main stations by railway staff with portable lifts. The assistance must be booked, together with the tickets, as soon as possible.

Airplane:
Due to the limited extension of the European territory, traditionally, the flights, more expensive than the train, were chosen only to reach the most distant destinations.
But the increase in railway tariffs due to the construction of high-speed networks and the birth of “low cost” airlines have changed the reality of transport on the continent.
Air transport for disabled people is organized on the basis of categories, established by IATA, linked to the level of assistance required: WCHR, WCHS, WCHC.
The passenger in a wheelchair, unable to move independently, falls into the WCHC category (the most assisted).
It is important to know that the cabin crew cannot help the passenger in using the toilets and that aircraft toilets, even those with the wheelchair logo, are tiny.
Assistance on departure and arrival is provided by the airport management company in collaboration with the airline that received the report at the time of booking the flight.
The passenger’s wheelchair is usually boarded at check-in and returned upon arrival, at baggage claim.
Chairs with batteries must be equipped with gel batteries (which cannot release liquids), must have isolated electrical contacts and be adequately protected to avoid damage (especially to the electronics and controls).
The conditions of delivery must be checked immediately and any damage must be reported with a written declaration before leaving the baggage reclaim area.
Often “low cost” airlines fly from more remote airports than the destination and this can affect the cost of accessible transfers.

Ships:
Shipping, in our time, is a very different transport sector than it has been for centuries.
Today, ship trips are sea or river cruises.
Large cruise ships sailing the Mediterranean and all seas of the world are one of the most accessible tourist habitats with 10 and more accessible cabins opening onto large decks connected by elevators, all of which are 100% accessible.

The dream ends at the moment of the shore excursions when one encounters the inaccessible reality of the cities that are visited, in some ports the berths are not at a pier but in the harbor and take place through tenders, not accessible to many passengers with special needs.
Excursions organized by ships are normally NOT accessible.

AccessiblEurope organizes excursions accessible from all major European ports in the Mediterranean, the Atlantic Ocean, the North Sea and the Baltic Sea.

River cruise ships sailing the major European rivers (Rhine, Danube, Moselle, …) are generally not accessible except for a couple of ships that have an accessible cabin but the interior spaces are limited.

Some ferries are accessible, for example those that connect Italy to Sardinia, some ferries in the Mediterranean, ferries in the Baltic Sea, probably in North America, and in some other countries in the world of which, however, we have no information.

For detailed information and quotes about “Services accessible transports” please contact us and write to: info@accessibleurope.com
AccessiblEurope Team