Accessible Spain and Portugal: The Iberian Peninsula is home to two fundamental tourist destinations full of natural beauty and evidence of a millenary history that has enriched them with very important monuments.

Spain and Portugal created, in the 2nd millennium, 2 empires extending mainly across the Atlantic Ocean but also in Africa and Asia.
Of these empires, only the cultural and linguistic legacies that survived the end of the empires themselves.

Spain is one of the tourist countries with the greatest tourist traffic favored by its conformation and by the climate that makes it a country very suitable for tourism, especially seaside.
The main destinations are Barcelona and the capital Madrid, but also Andalusia, a territory where Western culture of Christian origin mixes with Arab and Muslim culture, giving life to the native “Moorish” culture that has left beautiful buildings and monuments in towns which retain an ancient aspect.
Furthermore, Spain has 2 archipelagos that have become the leading destinations of European tourism especially during the cold winters of the continent: the Balearics in the Mediterranean Sea and the Canary Islands in the Atlantic Ocean.

In addition to mainland Spain, there are excellent accessible facilities and collateral services also in the Canary archipelago, and mainly in Tenerife, the largest of the islands.

Portugal is less accessible in general, its cities often have differences in height due to a very steep territory.

The country combines the eighteenth-century charm of its capital Lisbon (accessible from the central area and the promenade), rebuilt after a devastating earthquake in 1755, with the attractions of the North with Porto, Coimbra (not very accessible because it is partly built on a hill). 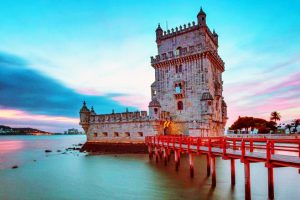 South of Lisbon where the Mediterranean enters the Atlantic Ocean is a region with a high concentration of accessible facilities and services: the Algarve.
Region with seascapes of great beauty and charming towns, it has been chosen by many Northern European retirees to spend their retirement years enjoying important economic advantages.
For this reason, many villas and apartments have been renovated and adapted to accommodate people with reduced mobility.

In the heart of the Atlantic Ocean off the coasts of Europe and Africa there are 2 Portuguese archipelagos that offer tourists a mild winter climate as well as a beautiful and luxuriant nature: The Azores and Madeira.
Both are of volcanic origin so the islands that compose them are steep and, in general, not very accessible, but there are accessible tourist services and operators that offer tours of the main islands.